Of all the detox tribes – juicing, raw, paleo, macrobiotic – Mayr cure disciples might be the most hardcore. Named after the Austrian scientist and pioneering holistic therapist Franz Xaver Mayr, FX Mayr clinics and medispas are dotted across Germany, Austria and Switzerland, peddling a spartan, results-driven regime of fasting, chew-training and purging epsom salts. Its no-nonsense approach to digestive health is particularly popular with the international fashion crowd (Alber Elbaz and Karlie Kloss are fans), wealthy Russians and high-powered German CEOs and bankers, all of whom think that superfood smoothies are for wimps. 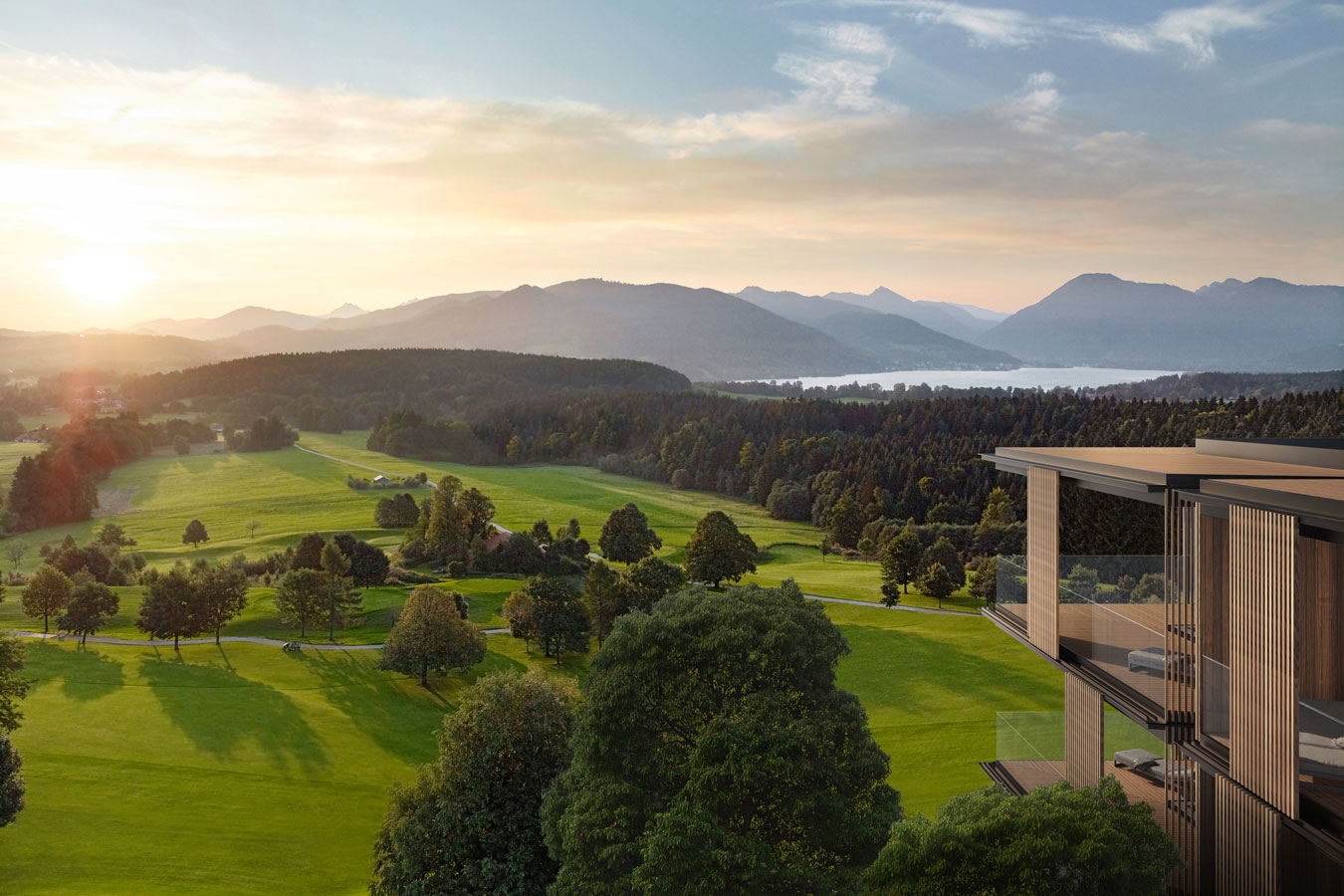 Devotees swear that a 10-day stay at a Mayr clinic leaves them several kilos lighter, fresh-faced, well-rested and miraculously rid of any rashes, bodily aches or stomach rumblings, but there was a resounding complaint: the decor. Compared to space-age-style new destination spas, the old-world sanatorium-style Mayr clinics were far from salubrious. Enter Lanserhof Tegernsee, a £55 million gleaming new complex perched in the foothills of the Bavarian mountains near Lake Tegern, which unites Mayr medical principles with design hotel aesthetics. It’s an architectural triumph by the award-winning architect Christoph Ingehoven with landscape design by Enzo Enea; 21,000 square metres of pale larch wood and glass, B&B Italia furniture, and a Bond-lair central fireplace soundtracked by a player tinkling on a Steinway piano.

Finally a Mayr spa that the fashion crowd will want to Instagram, that they can proudly invite a sceptical friend along to, one that feels like a stylish getaway and not just a hardcore detox. Pack your poshest loungewear; to give you an idea of the dress code, the Lanserhof’s boutique sells Missoni kaftans, ETRO loungewear and Stella McCartney sportswear. 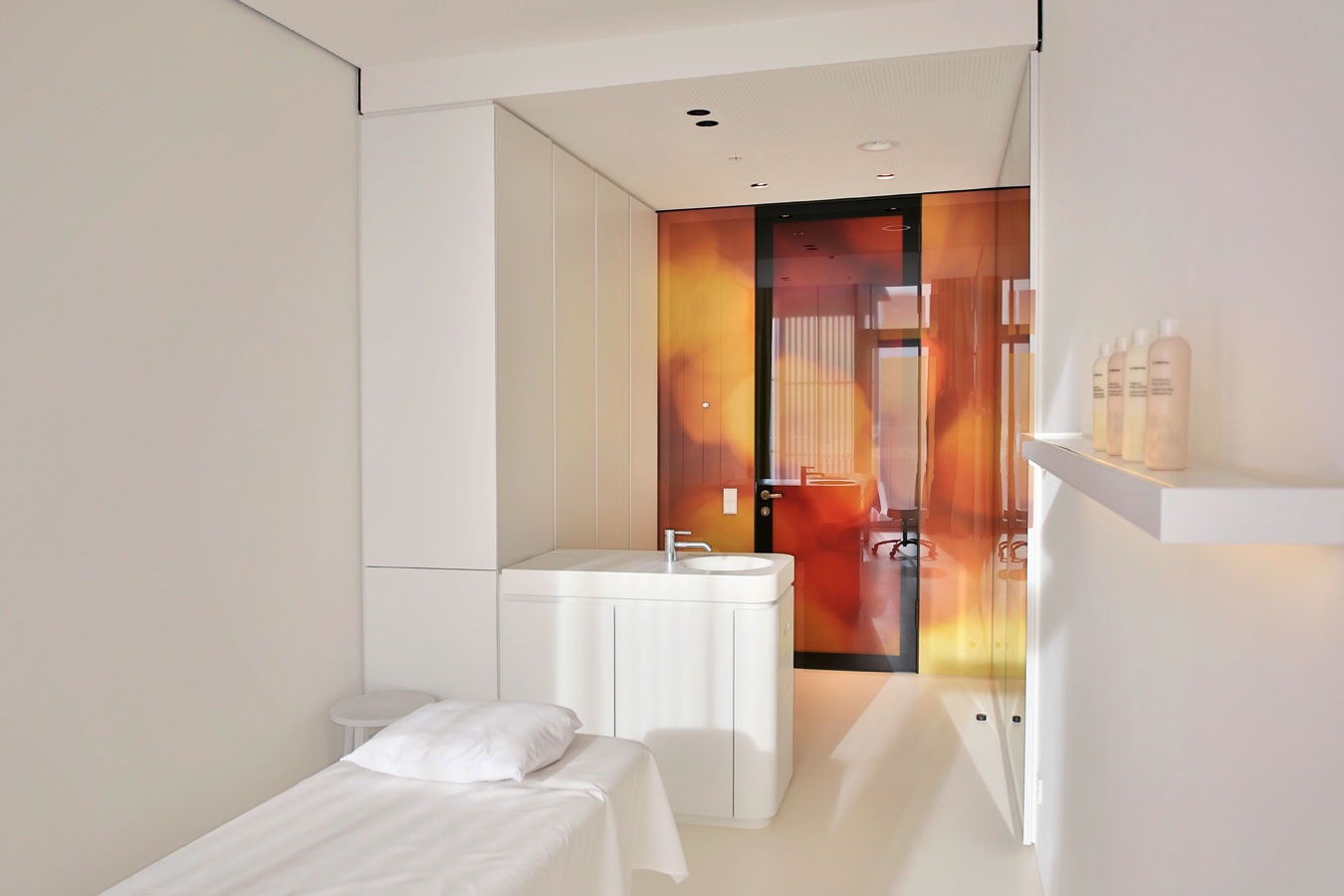 There is both a medical centre and a spa/fitness area, separated by an underground tunnel or a sprint across the lawn. The medical wing resembles a futuristic space station, where white-uniform-clad doctors and therapists guide white-robe-clad guests from a white leather sofa down white corridors into white treatment rooms; I keep expecting to stumble into a sci-fi scene where Scarlet Johansson emerges from a sleep pod. As it happens, the guest assistants look like they’ve been cloned from ScarJo cells; all the staff at the Lanserhof are gorgeous, radiating health, success and general overachievement.

Over at the fitness centre, a young, reliably attractive team of professional athletes (an ex-karate champ teaches me pilates; a former Olympic ski champ takes me nordic-walking through the hills) are on-hand (at a price) for individual coaching sessions. Most guests find that there’s enough in the daily free programme to wile away the hours, but I think this is the one weak spot at the Lanserhof; given the price tag I’d expect yoga to be a daily offering rather than a weekly one, and active sorts will find most of the programme frustratingly gentle. Staff explain that the emphasis here is on rest and recuperation, but I rely on exercise during fasts to help me sleep and take my mind off the hunger.

The heated outdoor saltwater pool overlooks the valley, and two glass-fronted saunas also make a feature of this irresistible view. It’s all heavenly – so heavenly, in fact, that you feel a bit guilty for spending your first few days feeling grumpy and lethargic.

Most guests come on the weeklong LANS Med Basic Programme, which includes a comprehensive schedule of massages and treatments. One worthy additional extra is acupuncture with Heather Lounsbury, who left behind a crowd of bereft celebrity clients in Santa Monica to take a position at the Lanserhof. 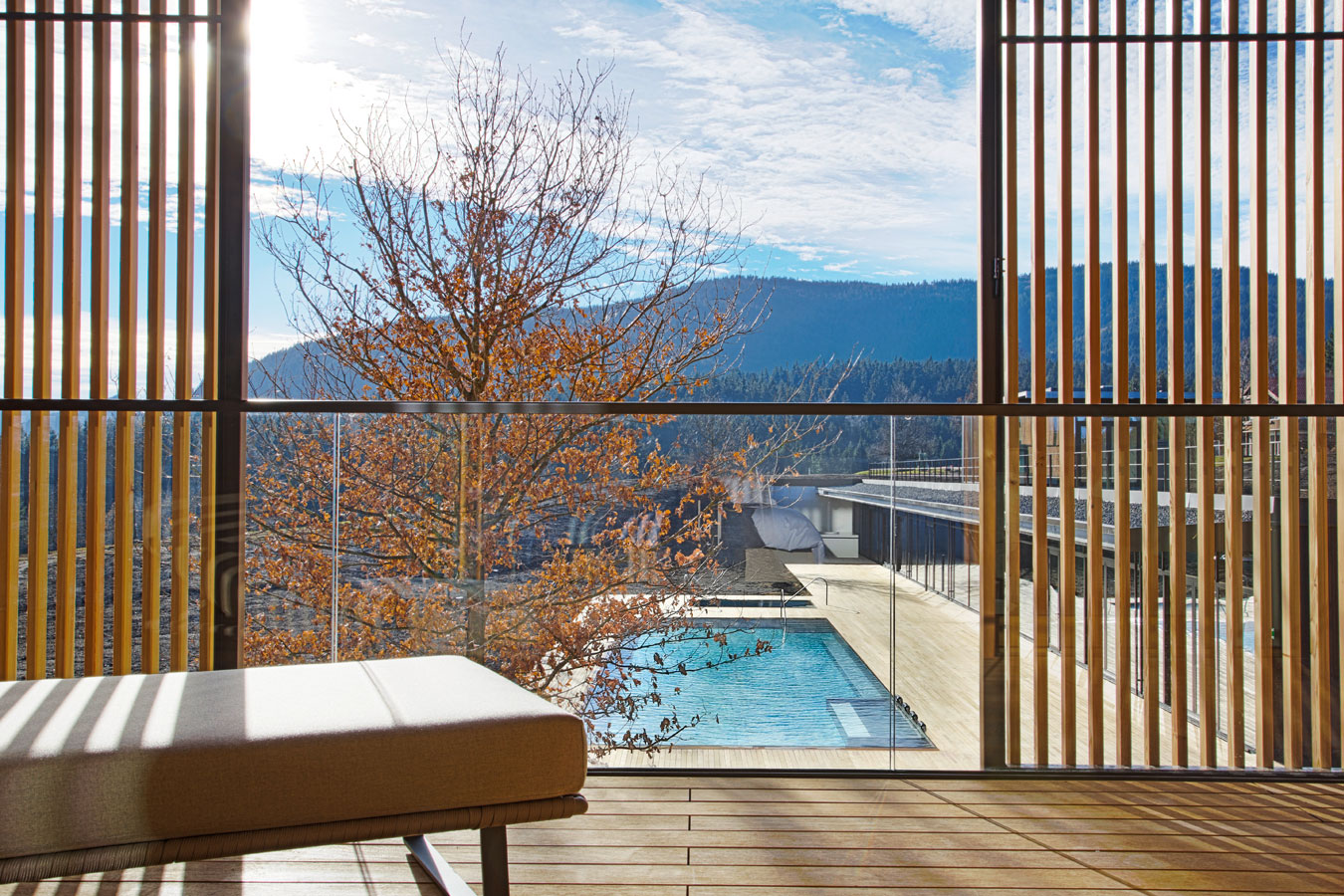 Yes, grumpiness and lethargy are part of the package, I’m afraid. My charming, alarmingly knowledgable doctor, Dr Andreas Schwartz, puts me through a series of scans, probes and pokes, blood tests and other diagnostics, before coming up with my own tailor-made LANS Med programme of detoxification and de-acidification.

I’m told I’ll be at my ideal weight if I lose 2kg, which, after a six-week road trip across America existing on beer and burgers, I have to admit might just be true. I’m then told I’ll be on a Level 1 diet for my entire week here. This means under 500 calories a day, in the shape of a stale spelt bread roll & sheep’s milk yoghurt for breakfast and lunch, then broth for dinner. Daily doses of epsom salts further encourage, um, ‘detoxification’.

For my first few days, I rather enjoy it. We’re so often told to avoid bread and dairy that it feels faintly rebellious to tuck into this menu on a detox. Well, “tuck in” is misleading. We nibble, swish, and chew every tiny bite 40 times, like Alzheimic mice.

A major tenet of the Mayr cure is chew-training. It’s tedious. A little gross. Not remotely conducive to conversation with oligarchs. But chewing on repeat, and eating in moderation is unquestionably a sensible way to eat. By the end, I’m horrified at the memory of demolishing sandwiches in seven gulps. I’m also pretty bored of bread and yoghurt.

Other guests report rampant weight loss, a kilogram from one day to the next; 5kg in a week. After a week chewing (and chewing, and chewing) 500 calories a day of bread & yoghurt, I lose just under a kilo. I might not have lost much, but I’m more excited about what I’ve gained. What thrills me about detoxes and medispas like the Lanserhof is their power to transform peoples’ habits – and therefore their lives – in a week. My eating habits are vastly improved. Today I eat slowly and chew properly. I eat smaller amounts. I’ve realised that nope, I’m not gluten or wheat intolerant, I’m just intolerant to a gargantuan barely-chewed sandwich. Duh, as FX Mayr probably wouldn’t say. 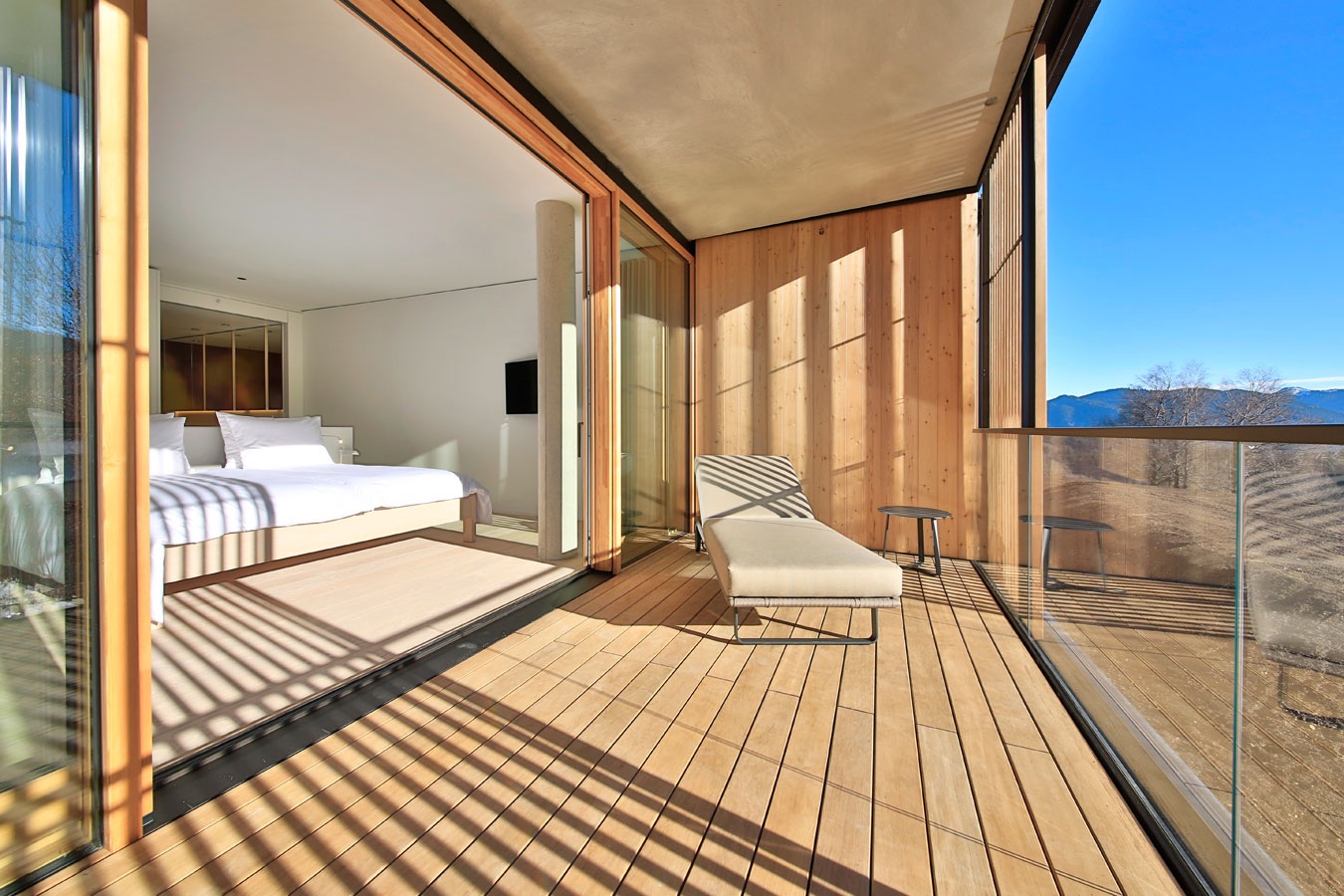 During a detox you really, really appreciate warmth and comfort, and the Lanserhof cranks the luxury levels up to 11. Pale larchwood interiors are softened up with plush angora rugs, sumptuous sofas in suedes and velvet and a vast, cocoon-like bed; I can’t imagine a more stylish room in which to feel crummy for a few days.

All rooms have balconies; mine has a daybed that I sleep on a couple of nights when I feel like falling asleep under the stars, wrapped in an angora rug. 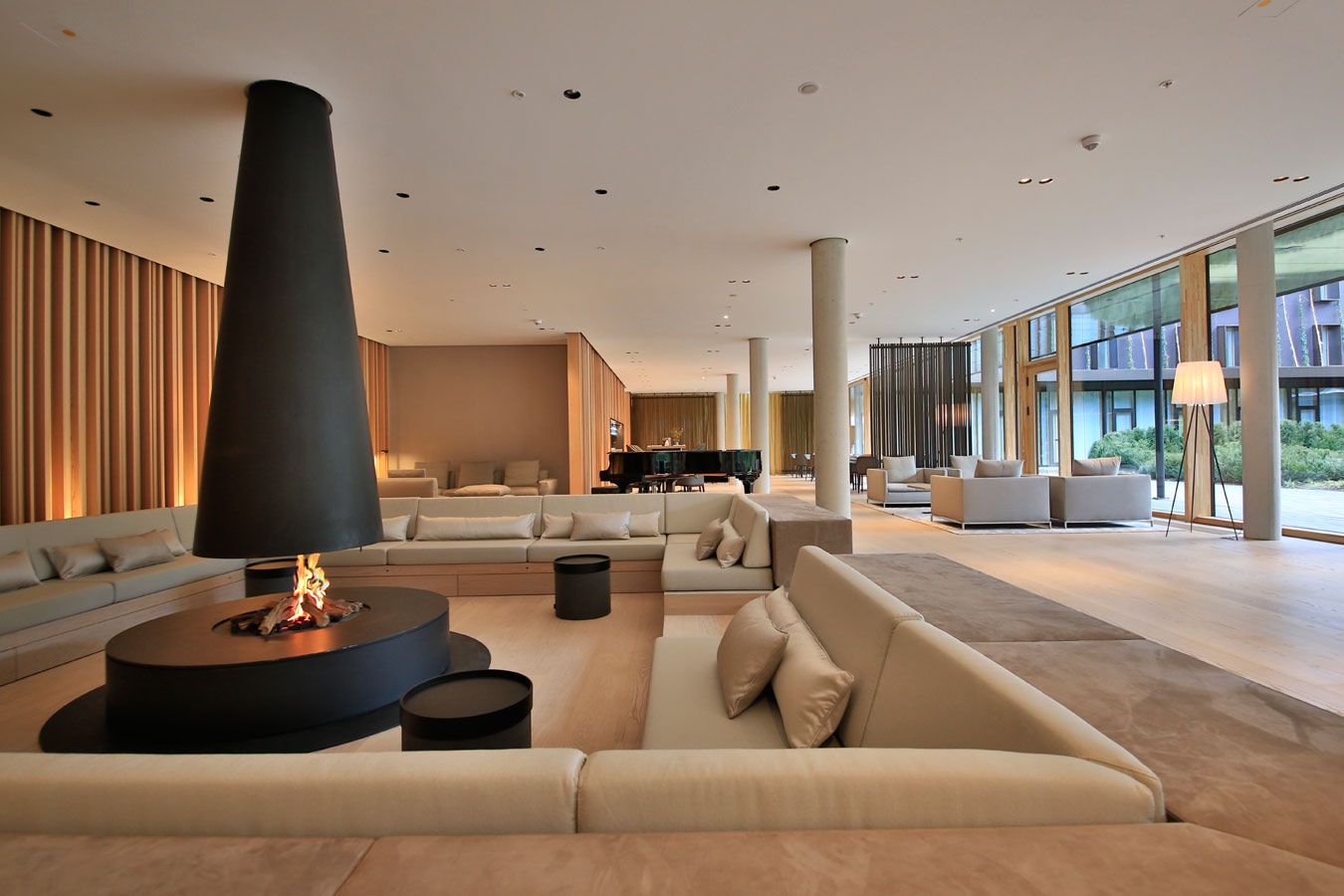 Guests are allocated different ‘levels’ and served a menu based strictly on doctor’s orders. My big tip: stay longer than a week, so you get past level 1 and onto the good stuff. Because the nutritionally balanced, organic ‘Energy Cuisine’ menu (served to guests who’ve reached their optimum weight) looks truly delicious.

I gaze hungrily at neighbouring tables where smug guests tuck into grilled monkfish and steamed greens or locally-sourced lamb with herby potatoes, and then get back to my yoghurt.

Lanserhof Tegernsee is situated amidst its own challenging 18-hole golf course, which has one of the highest tee-off areas in Germany.

The resort has cycling and walking trails in addition to numerous other options for outdoor sporting activities – all year round! Skiing and Nordic walking in winter, mountain-biking, sailing and hiking in summer. Additionally, you can partake in relaxing walks and exciting mountain climbing tours in every season.

By day five, you should be feeling pretty perky, so borrow the hotel’s free electronic Cannondale bikes and set off on a two-hour jaunt around the beautiful lake of Tegernsee, through cute Bavarian holiday villages and hilly grassland.

Ask the kitchen staff to pack you a picnic; even bread and yoghurt tastes amazing outdoors.

Royal Mansour Marrakech – A Retreat Fit for a King